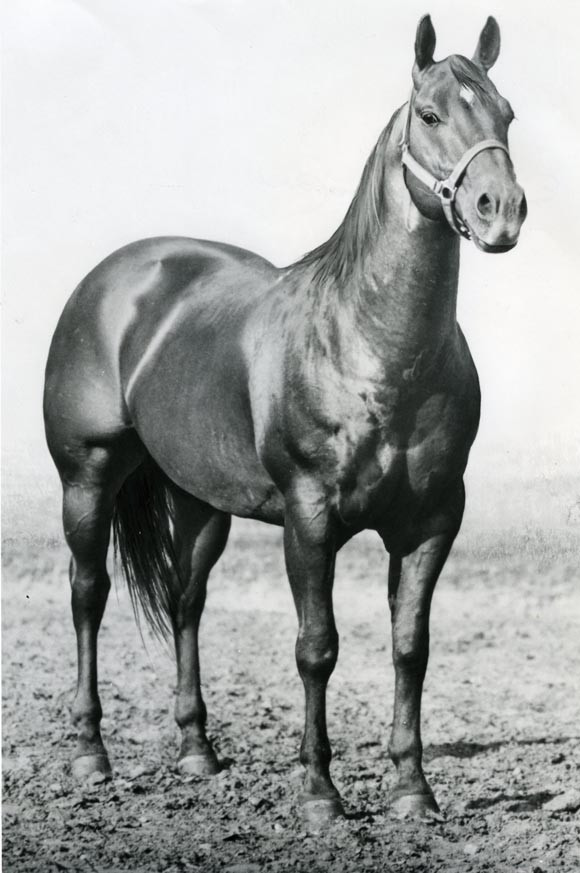 Inducted into the American Quarter Horse Hall of Fame in 1999

A new strain of top cow horses came along with the introduction of Peppy San.

Peppy San was foaled in 1959. Bred by Gordon Howell of El Paso, Texas, he was the son of Leo San by Leo and out of the Pep Up mare Peppy Belle. The sorrel colt was the only AQHA Champion ever produced by the pair.

Peppy San was a natural in the world of cutting. In 1962, he earned the reserve championship at the first National Cutting Horse Association cutting futurity ridden by Matlock Rose of Gainesville, Texas. After being purchased by the Douglas Lake Land and Cattle Company in 1963, Peppy San became the ranch’s senior stallion.

Over the next two years, he only performed in the cutting arena three to four times a year, but placed well in each show, and was ranked fifth in the Canadian standings in 1965.

In 1967, Rose contracted to haul Peppy San for the NCHA World Championship. During that year, the duo competed in 52 shows, taking home 50 checks. They easily won the world title, and in doing so, set a record for the most money earned in one year - $20,112.65. All in all, Peppy San earned 180 cutting points and 26 halter points, his AQHA Championship as a 3-year-old, a Superior in cutting and the 1967 high-point cutting stallion title.

After earning the NCHA world championship in 1967, Peppy San was retired to stud on the Canadian ranch until 1975, when he was moved to stand at the Rose Ranch in Texas. While he stood at the Douglas Lake Land and Cattle Company, he was bred to a limited number of mares. It was not until he was moved south and was bred to a larger number of outside mares that Peppy San was recognized as a top sire in his field.

Peppy San was euthanized April 26, 1989, due to complications from old age. He was inducted into the American Quarter Horse Hall of Fame in 1999.